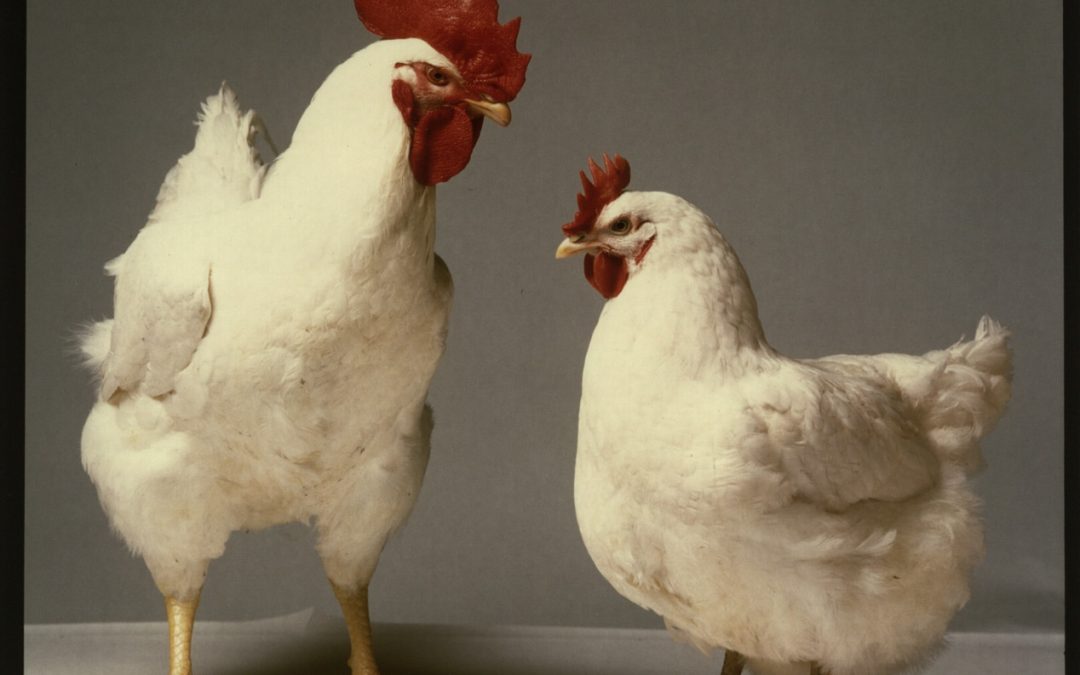 Poultry have been kept for the table and for egg production for a very long time and advice on their husbandry appears as early as Roman writings. For centuries poultry were used as barnyard scavengers and kept on a cottage industry scale. Manor houses had their dovecotes to provide winter meat for the well to do and manure for their gardens. By the nineteenth century the main commercial interest was in fancy breeds, of which by that time there were many, though there were other commercial ventures, such as cramming fattening birds for the higgler. Higglers were itinerant peddlers who traded and bartered in dairy, poultry, and small game animals.

It was World War 1 which provided the stimulus for the beginnings of a poultry industry as a source of food for the public and of income for the poultry keepers, though the country was heavily dependent on imports until very much later. At the outbreak of World War 2 30% of all eggs were imported, some coming from as far afield as China, Australia, Russia and Egypt and some were many weeks old before they entered the country.

Troops returning from World War 1 were encouraged to keep hens as a worthwhile occupation and one textbook of the time advised that 12 hens would pay the rent and the rates.

During the 1920s & 1930s the impression given by the art & literature of the day, particularly by children books, is that poultry was the pin money enterprise of the farmers wife and that fowls were still farmyard scavengers. There was some truth in this, but by that time there was also a thriving specialist commercial industry, with its own trade associations and journals and their publications reveal some irritation with their backyard and part-time competitors.

In 1930 the World’s Poultry Congress was staged in Britain and the Scientific Poultry Breeders Association was by then publishing learned and very good poultry science dealing with feeding, lighting and breeding. There were numerous pedigree breeders and a vigorous trade in pedigree stock, backed by laying trials organised by local councils, who also fielded county poultry instructors.

Almost all of the poultry farms of the day had range arks or fold units out on grass, served by horse drawn feed and water cans, though there were other systems.

The 1930s saw the first serious use of battery cages. Poultry coops hung up like canary cages, had been used to supply eggs on board ships for centuries and were known to the Romans. Their application in the 1930s was for the purposes of land and labour saving and also to get the birds out of contact with their own droppings, in order to minimise certain diseases. They were also used for the recording of egg production from individual birds of pedigree stock. Writers of the day claimed that one man could look after 500 commercial layers using cages.

The next impetus for development of the industry came in 1953 with the ending of rationing feed. Until then, large poultry businesses were not possible, simply because the feedstuffs for the birds were not available, but after that poultry farming as a business as we know it now began to develop.

By the 1950s, nutritionists understood about things like vitamins and it was realised that everything the birds needed could be put into a mash, so that there was no need to depend upon scratching about in the grass. In the mid to late 1950s the idea of the broiler chicken was brought in from America, at first as a profitable farming sideline for general farmers using existing farm buildings and later as a large specialist business using specialized broiler houses.

During the same period, the use of lights to take the seasonality out of egg production was perfected and became widespread, though its understanding dated from the 1930s when it was realised that like most birds, chicken aimed to lay their eggs in spring triggered by increasing daylength.

Until the 1950s, when day length control by electric light became normal, consumers resorted to storing eggs in waterglass for the winter a practice which seems incredible in these days of year round abundance. This involved immersing eggs in sodium silicate which acted as a preservative, keeping water in and spoilage bacteria out.

The advent of lighting patterns for layers, increased broiler meat production and the need to save land and labour, led to a rapid transition to indoor production in the 1950s and 1960s. it was soon found that the breath of the birds caused condensation and bad litter, so insulation began to be used in the houses and indeed by the 1960 most broiler houses were better insulated than the houses in which the owners lived. Summer temperature control was found to be easier if electric fans were used to assist the ventilation and this meant that windowless housing became possible and that helped substantially with the application of the lighting programmes which had been known about for sometime by then. The early 1960’s saw the development of the so called controlled environment system, which was to be dominant for most of the next 30 years.

At about that time, the traditional pedigree breeders were gradually surpassed and eventually replaced, by suppliers of hybrids. Hybrid crosses between two inbred lines were chosen after tests from a particularly favourable combination from a large base of recorded lines.

The costly research base and large market size required by some companies carrying out such breeding programmes spelled the end of the small independent breeder and the rise of the international breeding company with its supply farm, hatcheries and distribution networks organised on corporate industrial lines. By then the industry – and by then it fully merited that name – was backed by a substantial infrastructure of commercial and academic poultry science, a vigorous trade and technical press and by commercial and state run advisory services.

During the period, the prices of the products to customers fell dramatically in real terms, productivity rose and also during the period the proportion of laying birds in cages rose, farm unit size rose and the numbers of producers fell. An export trade in the means of production developed as the industry developed world renown.

The 1970s saw a burgeoning of applied sciences and in particular the astonishing realisation that the hen was a sub-tropical animal, probably originating is South East Asia, made sense of research findings that high temperatures were more productive than British winter temperatures. This led to further sophistication of ventilation and control equipment.

During the 1960s white egg laying strains were popular with producers, because of their greater efficiency at the time, though customers were prepared to pay more for brown eggs. By the late 1970’s, brown egg strains had become more efficient and popular and during the 1980’s white egg became quite scarce.

From the 1960s onwards consumers began to be concerned about animal welfare and in particular began to object to battery cages, so that by the late 1980s a swing back to free range production, originally of eggs, but later even including broilers, began with the revival of some production systems which were very old in principle, but adapted to modern knowledge.

The scale of the swing, made possible by premium egg prices, exceeded the rate expected and about 12 % per cent of all eggs were again free range. Whether the problems of disease and impracticality which originally led to cages in the 1930s, will return to prominence remains to be seen, but there is no doubt that outdoor birds will always eat more and therefore cost more.

And so the story has gone full circle – twice. The Romans kept hens in cages, then for several centuries the birds went out to the barnyard, to return to cages in the 1930s, then outside again in the 1980s and 1990s.

The introduction on the preceding pages charting the history of the Poultry Industry is adapted from an article by Dr David Charles, which appeared in Poultry World in 1991. At the time David was an ADAS national specialist adviser and many of the documents used to compile this article are held in the British Museum of Poultry, and in its associated archive collection. The following images form part of the museum’s exhibits. 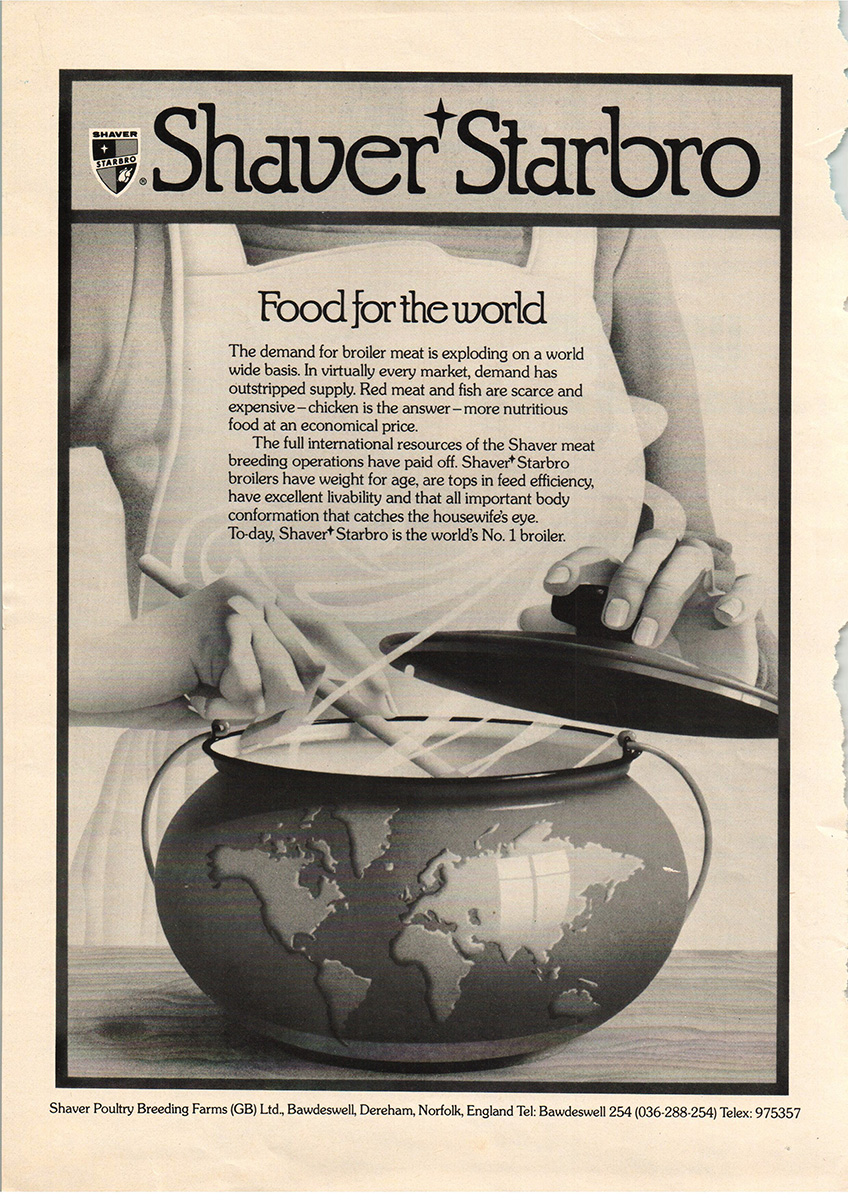 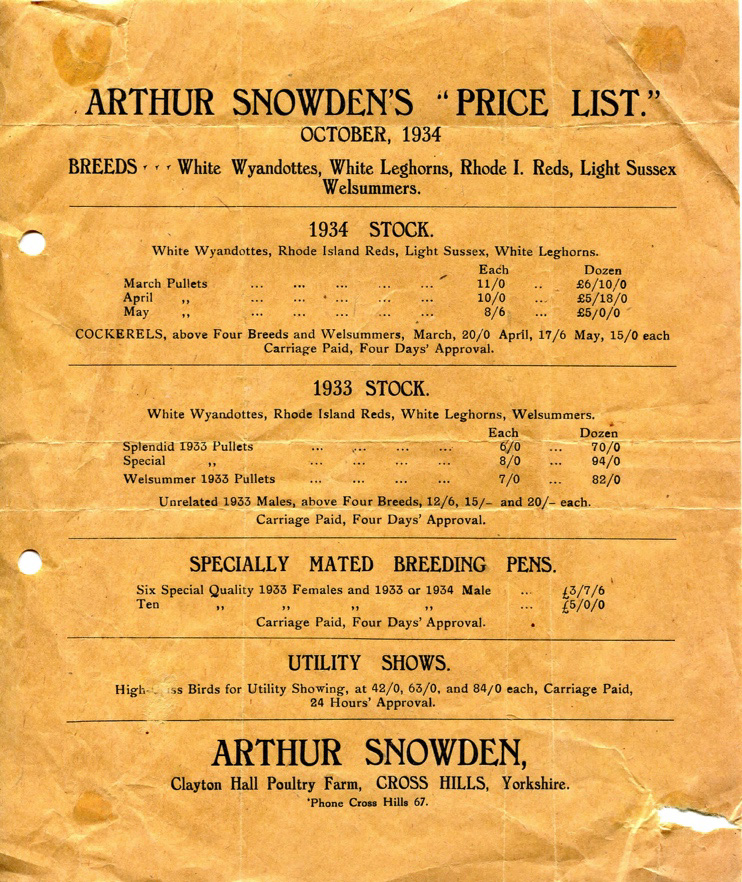 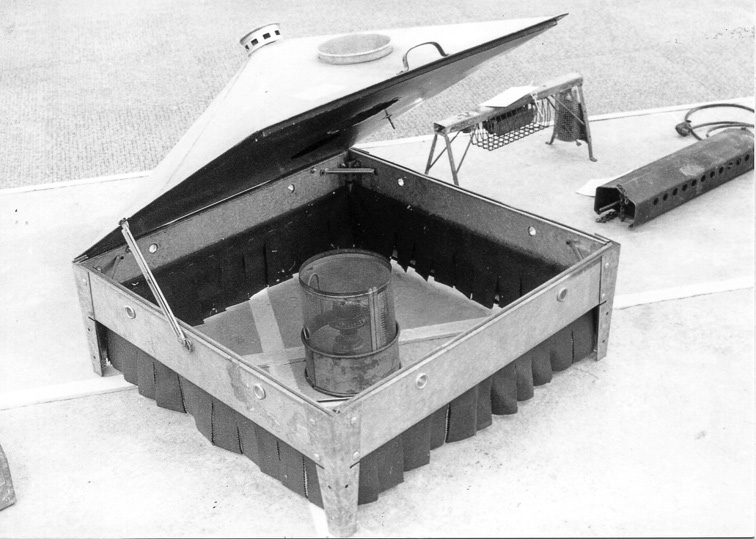 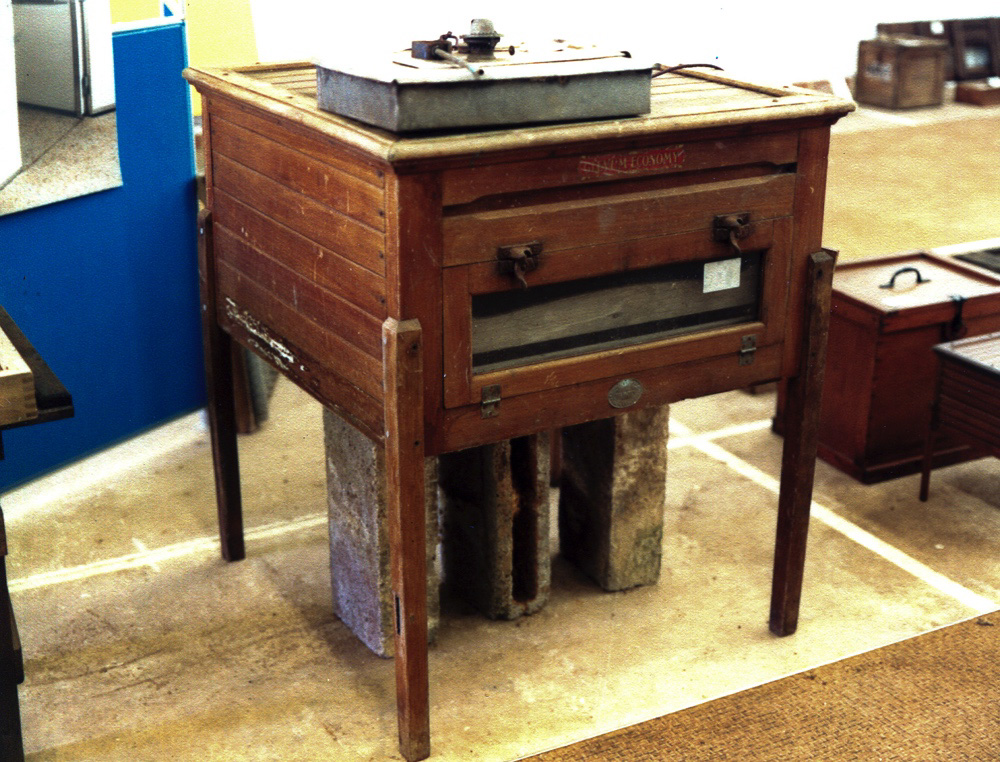 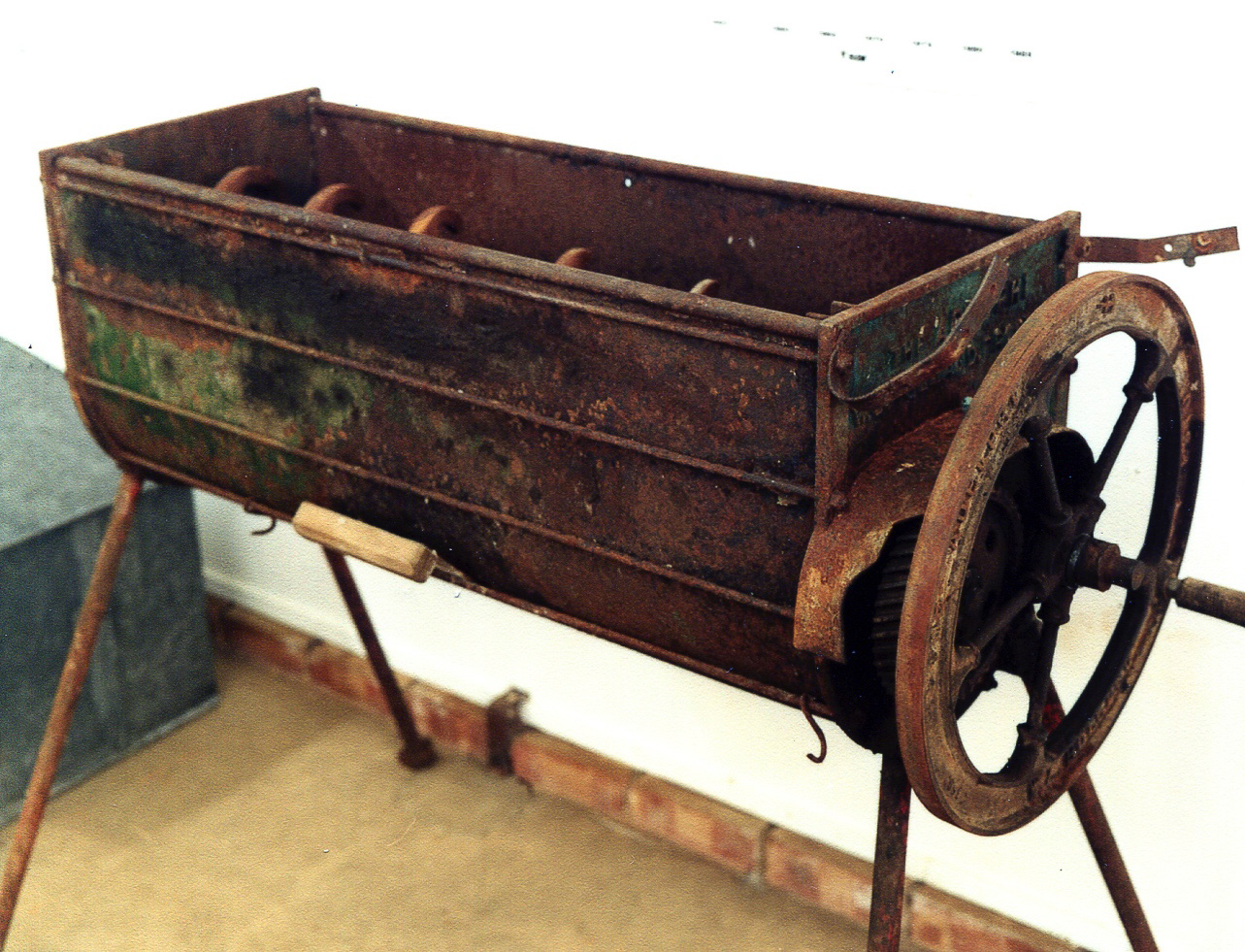 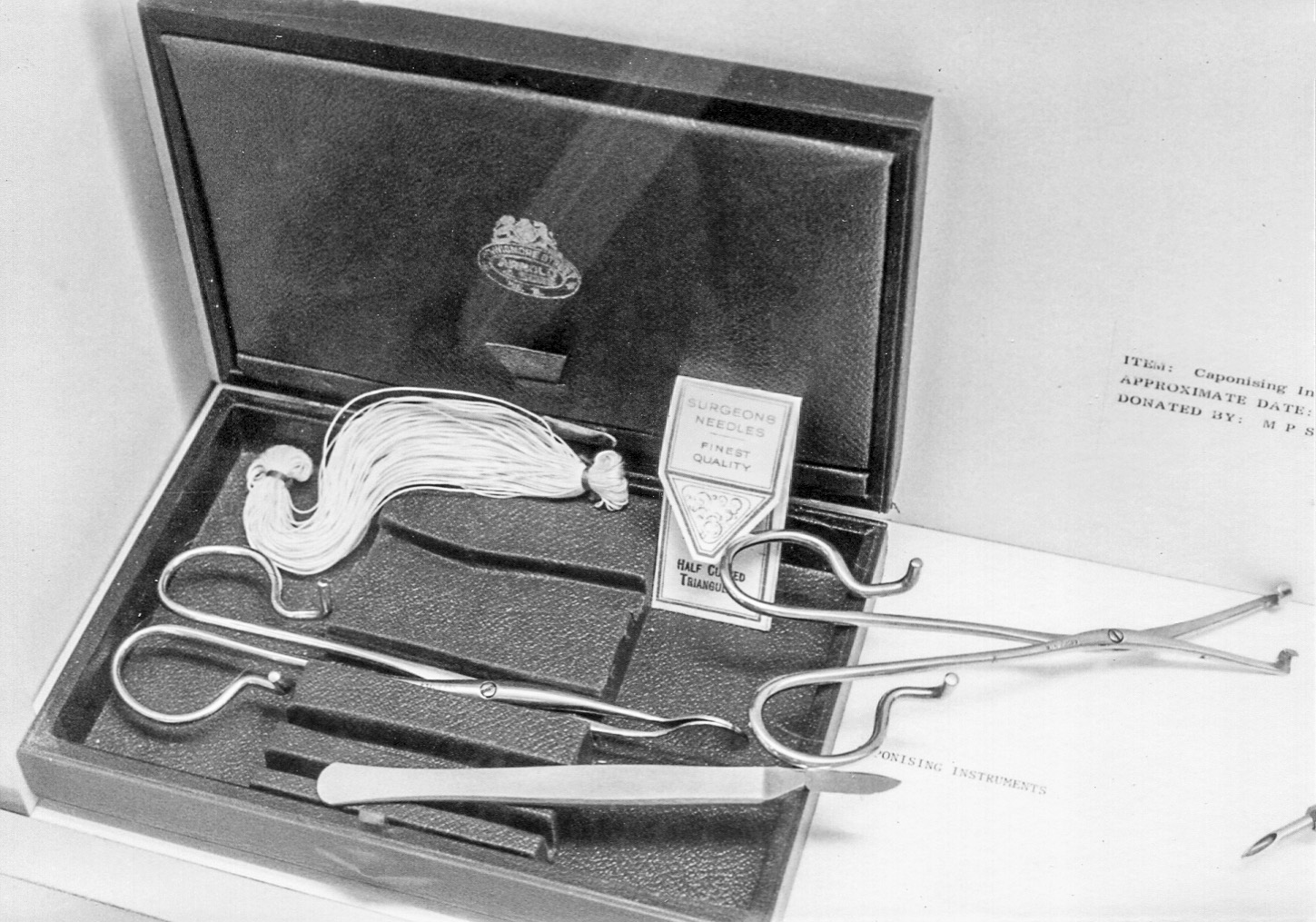 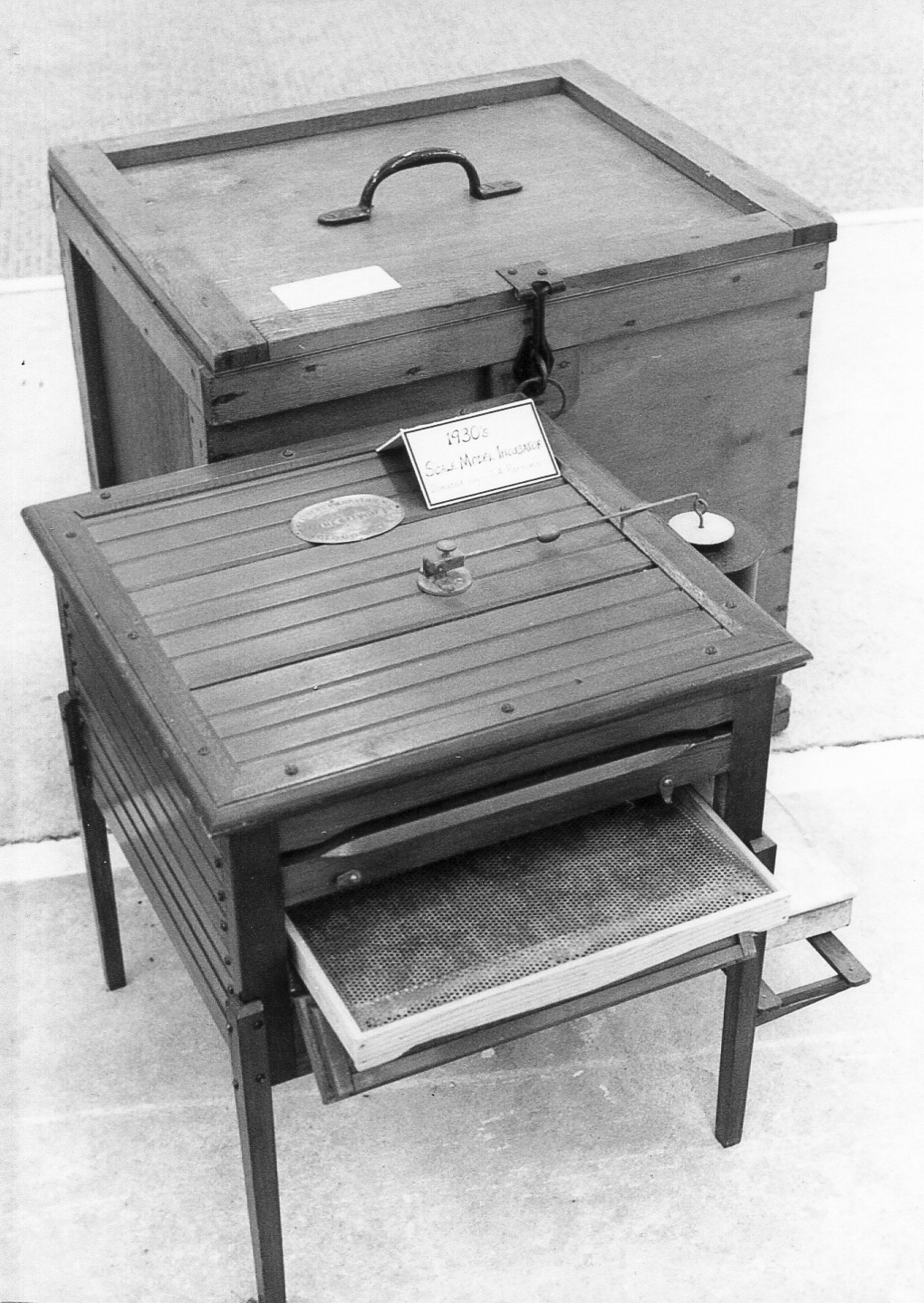 Salesman’s sample model of an incubator circa 1930.

What next? The rest is history!

If you have any memories of key moments we have missed, or any errors in the details we have included, please don’t hesitate to get in touch. With your help we can get get this section as clear, concise and accurate as possible.