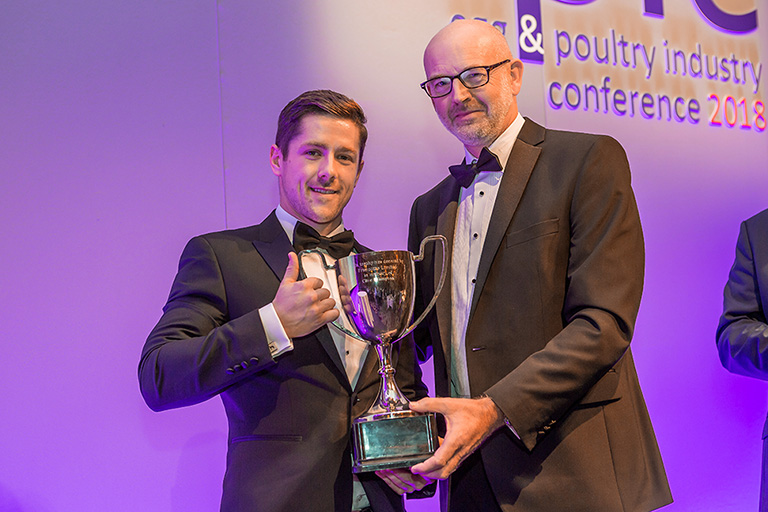 This year’s competition – now into its seventh year – attracted some very high calibre candidates with winner being Jim Wilson.

For someone of his age Jim has already dedicated a significant portion of his life to poultry and has accumulated a good level of experience and knowledge. Jims passion for poultry started as a child with a few hens running around the garden but this quickly progressed onto his first job; working on the local farm rearing a couple of hundred turkeys for Christmas. This was the point where Jim realised he could make a career out of doing what he loved, so upon finishing school he applied to Harper Adams.

Once there he studied BSc Agriculture with Animal Science and focused all his efforts on learning as much about poultry as possible and to that end he also worked around his studies on the local Colony egg unit to help pay his way through university. This was his first taste of commercial egg production.

During his second year of university he managed to secure the British Poultry Council Scholarship and a placement year with the turkey company Kelly turkeys, based in Essex. This placement year was a fantastic experience and Jim learned much here, spending time in the hatchery, rearing farms, breeding farm and in the processing plant. This placement year was followed by returning to Harper Adams to finish his degree and write his dissertation. During this time he conducted a feed trial on broilers looking into ways to replace Soya with a more sustainable product and this piece of work was published in British poultry science.

Upon completion of his degree he was offered a graduate job back at Kelly Turkeys where he returned as a breeder farm manager, but also oversaw the running of rearing farms and the night shift of the processing plant, further developing his experience within the poultry industry. During this time Jim was also a member of Tescos Future Farmer foundation.
After a couple of years post gradation Jim decided he wasn’t finished learning so enrolled in a masters degree at the Royal Veterinary College of London; studying intensive livestock health and production. This was studied part time around his full time role at Kelly turkeys.

After a year studying the Masters degree Jim further advanced his career by taking the role of Regional Manager at Noble food, covering the south of England and wales with over 40 farms and half a million laying hens under his supervision. This role was another step up in Jim’s career path and enabled him to use the theoretical knowledge he has gained through 7 years of poultry dedicated study.

To finish up his masters degree Jim conducted his thesis on the effects of perching on keel bone damage in free range laying systems, in conjunction with Bristol university. This paper again is aiming to be published in British Poultry Council. This July Jim completed his Masters degree and in his ever unrestful fashion has chosen to continue his learning by working closely with Bristol University on behalf of Noble foods in coordinating studies to be undertaken on his farms. To add to this Jim has also now been asked to represent Noble Foods in partnering with Elanco to develop a salmonella risk assessment that could be used to help reduce risk on farm. Jim is still early in his poultry career but there is now doubt there is a lot more to come.