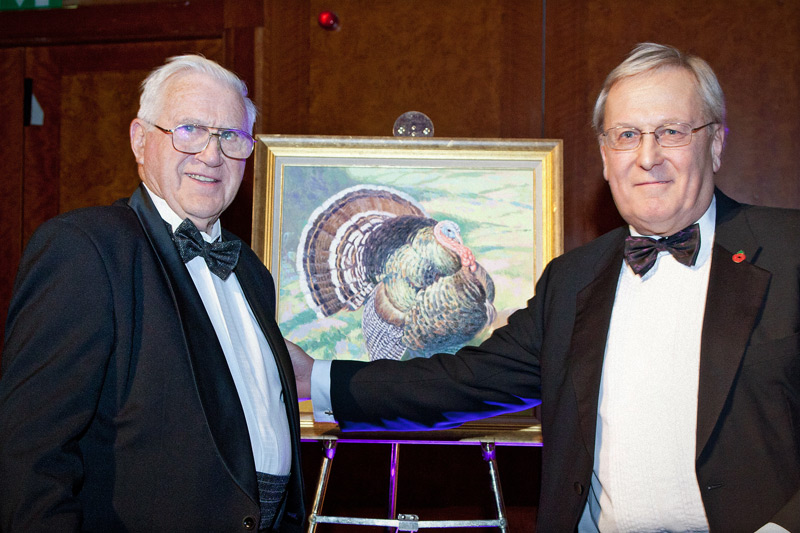 Derek Kelly was presented with a lifetime achievement award at the Egg & Poultry Industry Conference during its 50th anniversary event at Newport in November 2016, by Stephen Lister, Chairman of the Organising Committee, on behalf of EPIC and indeed the whole of the poultry industry he has served over that 50 years.

The award took the form of an original painting of a turkey stag by the well known East Anglian artist, Libby Turner.

Derek, together with his wife Mollie, has been an inspirational figure in our industry for the entire life of EPIC. Derek began breeding turkeys at Danbury, Essex, in the 1970s and today Kelly Turkeys is one of the largest suppliers of poults for production of traditional Christmas turkeys as well as producing the multiple award-winning KellyBronze turkey. He remains a champion of the small dedicated seasonal turkey producer.

In 1998 Derek was recognised nationally for these achievements when he was awarded with an MBE in the Queens New Year Honours list for his services to the poultry industry.

Derek has served on many important organisations and committees, including the EPIC Organising Committee since its inception.
Derek brings a quiet, modest, yet firm and authoritative approach to everything he does. He has a love of turkeys and of fair play. The award at the 50th anniversary EPIC event was a fitting tribute to his enthusiasm and skills and was met with acclaim by all those present.