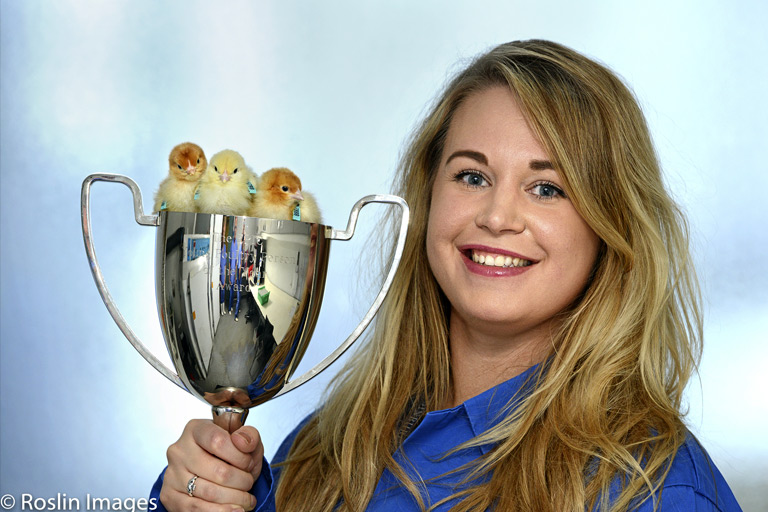 This year’s competition – now into its sixth year – attracted four very high calibre candidates, who had the judges scratching their heads for some considerable time.

Part of that dynamic stems from the people, and in particular some of the younger people who have already made their mark and are driving the sector forward.

And that is something the EPIC committee is keen to recognise through its Young Poultry Person of the Year Award.

In particular, the judges were looking for people with leadership skills,  who have demonstrated innovative thinking and who have shown commitment and determination in their work – basically, people who are likely to benefit the broader industry as they develop their careers.
This year’s winner certainly ticks those boxes.

Dr Jessica Martin may not be a household name, but she is certainly well-known at the Royal “Dick” School in Veterinary Sciences at Edinburgh University where she has emerged as a star performer – both on the research side and on the teaching side.

Among her earlier work was research into humane methods of killing poultry on farm, funded by a Humane Slaughter Association scholarship.
As part of that project she designed a novel mechanical killing device which is now routinely used at SRUC’s poultry facility, and is currently being evaluated for commercial use in chickens, turkeys and ducks.

Continuing with the “killing chickens” theme, since completing her PhD in 2015, Jess has been deeply involved in a major assessment of low atmospheric pressure stunning (LAPS) – work which has been submitted to the European Food Safety Authority, and may lead to a major change in the way birds are killed in commercial practice.

Jess’s other research projects include: investigations into the effects of age and strain on commercial turkeys the impacts of stocking density on chick welfare during transport and the development of a custom-built lighting system for broilers.

Jess, was nominated by Vicky Sandilands, senior animal welfare scientist at SRUC’s Auchincruive site. Vicky praised her for her “rigour, insight and sensitivity” and said she was “a wizard at complicated statistical analysis”.

Jess has an impressive publication list, and is now “an essential part of the teaching team at Edinburgh University” where she majors on animal welfare and statistics.